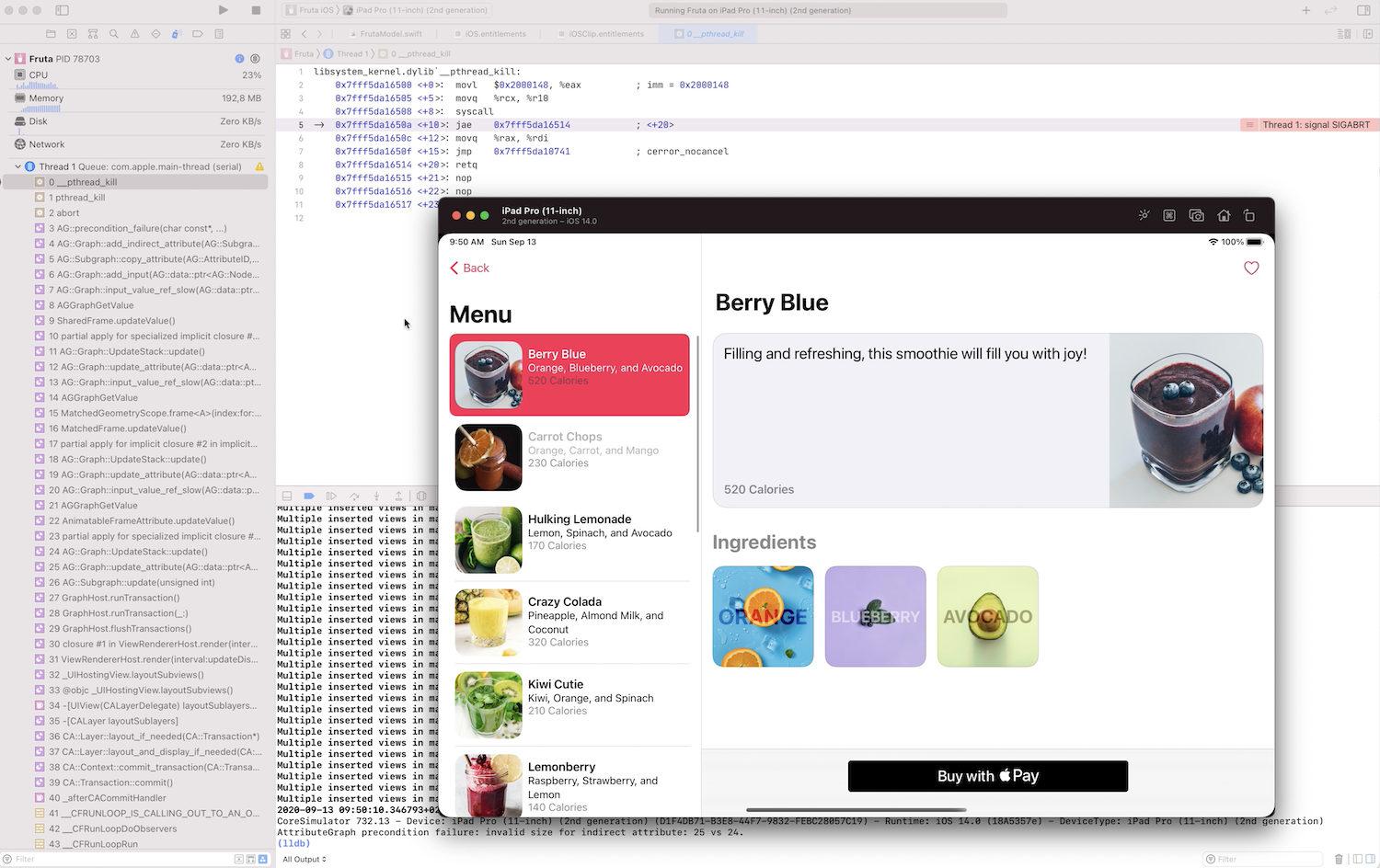 Apple released SwiftUI last year, and it’s been an exciting and wild ride. With iOS 14, a lot of the rough edges have been smoothed out — is SwiftUI finally ready for production?

I took a look when Big Sur beta 1 came out, and it was pretty unpolished:

Been clicking around for a minute with Apple's new Fruta SwiftUI sample.

Things jump around wildly, fav' doesn't work, and it crashes once you open a second window. I understand it's b1, but looking at how SwiftUI went last year I doubt this will all be fixed. pic.twitter.com/zGRRYswRde

Since then, there have been many betas, and we’re nearing the end of the cycle, with the GM expected in October. So it’s time to look at Fruta again. And indeed, the SwiftUI team did a great job fixing the various issues: The toolbar is pretty reliable, the sidebar no longer jumps out, multiple windows works… however, views are still sometimes misaligned, and it’s still fairly easy to make it crash on both macOS (FB8682269) and iOS 14b8 (FB8682290).

Most SwiftUI crashes are a result of either a diffing issue in AttributeGraph, or a bug with one of the bindings to the platform controls (AppKit or UIKit). Whenever you see AG::Graph in the stack trace, that’s SwiftUI’s AttributeGraph (written in C++), which takes over representing the view hierarchy and diffing. Crashes there are usually in this form:

Googling for this error reveals that there are a lot of similar problems. People sometimes do find workarounds via wrapping views into other views or changing the hierarchy. But mostly, we’re powerless, and this is something Apple needs to fix in its framework. Since SwiftUI ships as part of the OS, end users need to update their devices to get these fixes.

SwiftUI uses many components from AppKit and UIKit, which is a much better strategy than reinventing the wheel. These components are stateful and are synced with custom manager classes that perform the state diffing. These wrappers can cause issues, and as they’re written in Swift, there aren’t many possibilities to fix issues from the outside (unlike with swizzling in the earlier days).

Example: Removing a favorited item while it’s selected crashes in the AppKit binding that syncs the SwiftUI state with NSTableView (FB8684522).

It’s likely there more bugs waiting to be discovered, but I only spent a few hours with Fruta and on writing up this article.

On my 2,4 GHz 8-Core Intel Core i9 MacBook Pro, it takes longer than a second to update the main view when changing the selection. This feels sluggish, not to mention it’s significantly longer than even most websites — that load data via the network — need. Fruta has everything local. What’s so slow here? Let’s look at Instruments! 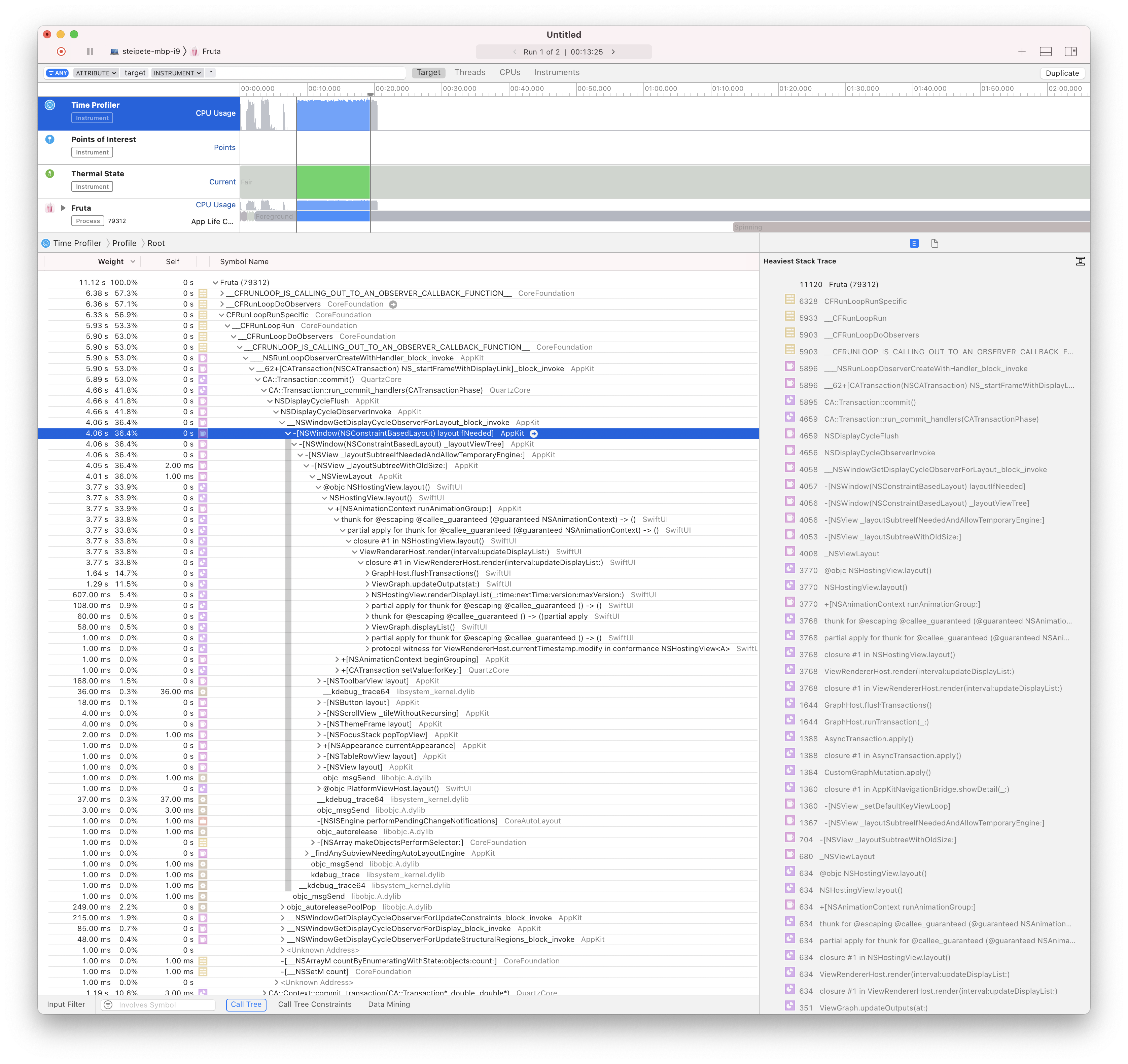 The good news is there seem to be a lot of potential future optimizations possible to make this fast. Alternatively, there’s always the possibility of dropping out of SwiftUI for performance critical parts.

This isn’t unique to Fruta. I’ve been taking a look at @Dimillian’s RedditOS app, which is built with SwiftUI on macOS. He stopped development because it’s so slow that it’s not shippable. I did some debugging with an earlier version of Big Sur where the app still somewhat worked:

The AppKit port of SwiftUI is... not very efficient. Been testing https://t.co/67UCuKmPts for a minute, 10% of the time it freezes on the main thread are just spent to... update toolbar buttons? It's a bit hard to measure because it crashes so quickly. pic.twitter.com/hW4nNe0ydV

The general pattern here points to AppKit: The interaction between SwiftUI views and AppKit views seems to be poor. It’s important to understand that SwiftUI itself is fast — for many use cases it’s even faster than using CALayer, as @cocoawithlove proved — and the UIKit port is by far faster and better than the AppKit port.

Update for Big Sur b9

Apple seems to have fixed an issue and specifically mentioned the Fruta Sample app in the Big Sur Beta Release Notes. However, after testing, it’s still trivially to crash.

Apple got back to me, explaining that I should test this again:

They indeed fixed the easy-to-trigger bug (good job!) and it took me a minute to get it to crash again. To be fair, this is a different issue and seems related to Apple Pay. I also found another Attributed Graph crash.

iOS stabilized as well, however I found a race condition in the List Coordinator. Overall things are really improving fast, the team here is working hard.

If your target platform is iOS 14, you’re now good to go with hobby projects or individual screens in SwiftUI. I’m currently working on making our PDF SDK for iOS easier to use with SwiftUI, and we’ll replace the settings/about screen of PDF Viewer with a SwiftUI version.

I personally wouldn’t yet go all-in on SwiftUI for production apps, although the crash rate is likely manageable and Apple is actively improving things with every release. Remember that SwiftUI ships with the OS, not with your app, so any bug fixes will only help if your users update the OS.

Other ports are not so great. AppKit seems particularly troublesome, but I’ve also heard of big issues with tvOS. If you need to deploy your app to the Mac, use Catalyst, which is a much more stable binding and feels really good with Big Sur’s native mode, where content is no longer scaled.

If you’re curious about SwiftUI, please don’t let this dampen your enthusiasm. It’s extremely fun to write, it’s clearly the future at Apple, and all these issues will surely be resolved within a few years.

Supporting Both Tap and Long Press on a Button in SwiftUI

My task today was quite simple: adding an optional long-press handler to a button in SwiftUI. A regular tap opens our website and a long press does… something else. Not so difficult, right? Naive ...

iOS 14 introduced keyboardShortcut, a convenient native way to add keyboard shortcuts to SwiftUI. However, if you end up using it, it likely won’t work. I was curious why that is, so follow along w...

With iOS 14, Apple improved the built-in logging framework and added many missing pieces. Is OSLog now something that can finally be used? Does OSLogStore Work Yet? No.* *Surprisingly, Apple re...